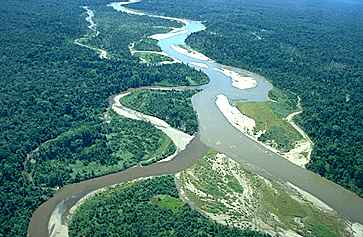 New Guinea is the second largest island on our earth after Greenland and posses probably the most biggest and originally wilderness. These Island posses a total area of 771,900 square kilometers. Along 141. Degree of Longitute New Guinea get divided in 1828. The eastern part is since 1975 the independent State of Papua New Guinea. The western part is since 1963 occupied by Indonesia. These "West Papua" part get the name Irian Jaya. These name have been changed by Indonesian President Abdurrahman Wahid (Gus Dur) into PAPUA on 01 of January 2000.
The whole island has more than 600 islands all around. New Guinea belonged actually to the Pacific region and is constituent of Melanesia.

The origin of New Guinea

Approx. 30 million years ago the mountains arise at the island. Still until today the different tectonic discs in this region are in motion. This reflects itself in the many earthquakes in this region.

The landscape of New Guinea

It shaped by the large mountains which the island is pull through. Large valleys and steeply rising mountains are the typical picture in the high mountains of New Guinea. The biggest mountain are in the western part of the iasland. It´s the puncak Jaya with its 4,884 m. These are the highest mountain range between the Himalaya and the Andes. On the eastern part of New Guinea we have to name the 4509 m high Mt. Wilhelm. In the south of Papua (Irian Jaya) we can found the wide swampy areas of Asmat. To the north there are also many wide swampy areas. Especially we have to name the Mamberamo area. These will be the most biggest swampy area of this kind. In Papua New Guinea you can find some untypical landscapes for New Guinea. Especially in the southern part. This are the grasland savanne. To the north the landscape will be shaped by the big rivers like Fly and Digul. Also a hill landscape have to be pronaunced.

You can found more exact definitions at the Flora page.